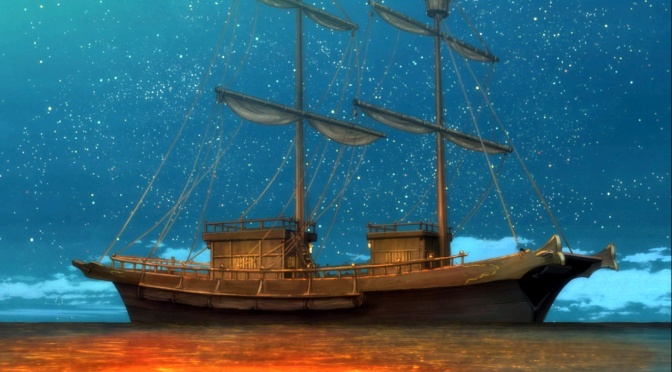 The group encounters new challenges as the newest dragon takes us to new heights. Unfortunately, he’s not so excited about it. Maybe he is for one guy. Might Hak have found his match? We’ll only know when they enter this city of corruption and vigilance.

Summary
After days of journeying, Yona and the group arrive at the port city of Awa. Yona, Yun, Ki-ja, and Shin-ah marvel at the sea since it’s their first time seeing it. Hak reveals that he’s been there before. 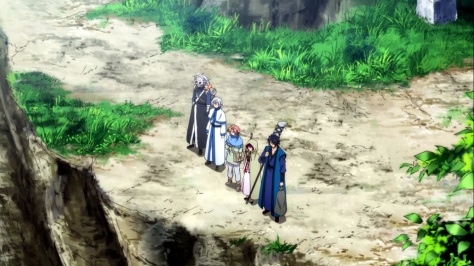 Yona asks Ki-ja if he senses the Green Dragon nearby. He affirms it but the Dragon seems to be moving at a dizzying speed. Yun generalizes that a dragon’s powers are limited. He also mentions that they are weary from all the travelling and that they need food. Yona, Ki-ja, and Shin-ah express their want to go to the city but Yun reminds them that they look too suspicious to be wandering around. 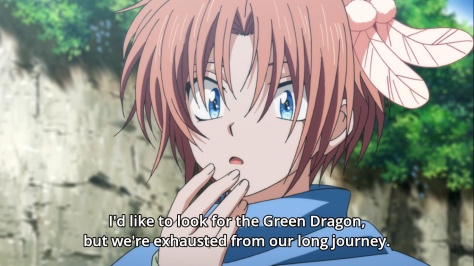 Hak volunteers to go by himself. Yona offers to go too but Hak immediately rejects, calling her ugly. Ki-ja rushes to Yona’s defense. He points out the bags under her eyes, the cuts on her hands, and that she’s pushing herself too hard, telling her to rest. 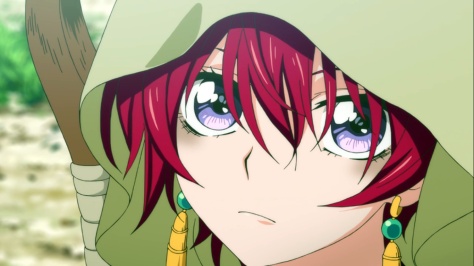 Yun tells him to be careful and not to start any trouble. Hak leaves his hsu quandao to him since it might draw too much attention. Hak then reminds the dragons but they already know that they have to protect Yona. Before he leaves, Yona asks him to come back soon. 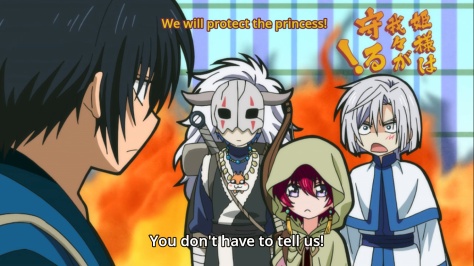 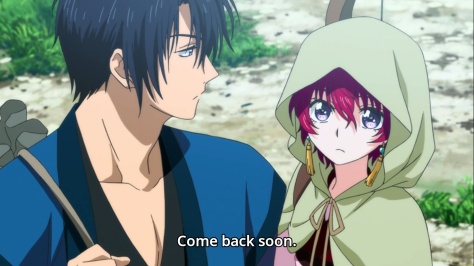 As he walks around, Hak notices that the denizens seem so lifeless. He then spots two officials harassing a woman. At first he hesitates but puts one down in the end. He’s unexpectedly joined by a green-haired man. They notice each other and takes down the other official. As other officials notice, they make a run for it with the woman. 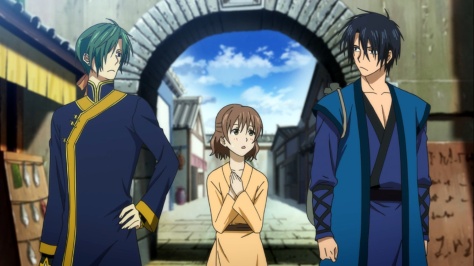 As they run, the green-haired man asks Hak if he’s a soldier but he just says that he’s a traveler. Hak then compliments the man on how he handled things but the man misinterprets it. When they lose the officials, the green-haired man receives a strange sensation. He volunteers Hak to walk the woman home and disappears. 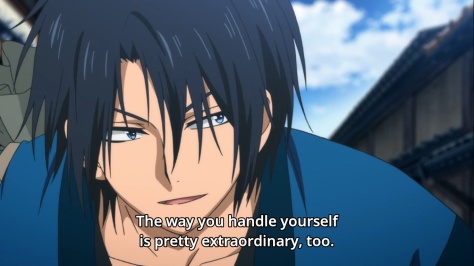 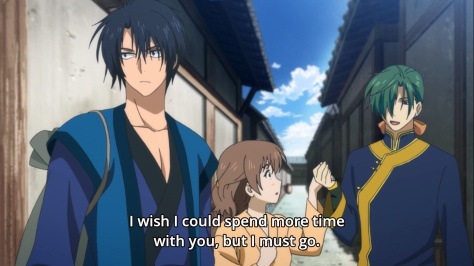 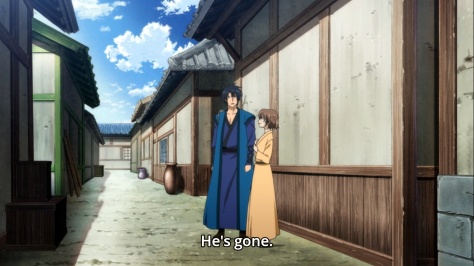 The man jumps from roof to roof and lands on a ship moored in the port. An old lady greets him and calls him Jae-ha, scolding him for not landing quietly. He then defends that he was in a hurry not because of the officials that were after him but because he’s sensed the presence of the Blue and White Dragons.

That night, Yun scolds Hak for coming back without anything and tells  him that they are all going to the city the next day. Ki-ja affirms with Shin-ah that the Green Dragon is toward the ocean.

The next day, the group goes to a nearby area where Ki-ja and Shin-  ah felt the presence of the Green Dragon. Hak asks if he could enter the city on his own to look for weapons and leaves his weapon with Ki-ja. He decided to do so since the other day the officials saw his face and that would put Yona in danger. 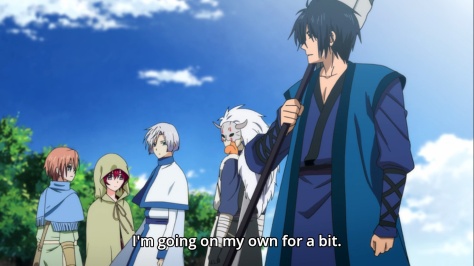 As they walk some more, Yun notices that Hak was acting strangely like he’s hiding something, that he’s usually stuck to Yona but this time he went off on his own. Yona tells them that he trusts them but Yun suggests that he might be seeing a woman.

They arrive at a cliffed cove and when they look below, they find a pirate ship. Yun says that the dragon must be in there but Ki-ja and Shin-ah say that the presence disappeared.

In the city, Hak looks at some weapons in a shop. He meets the green-haired man once again. The man asks him to come with him. 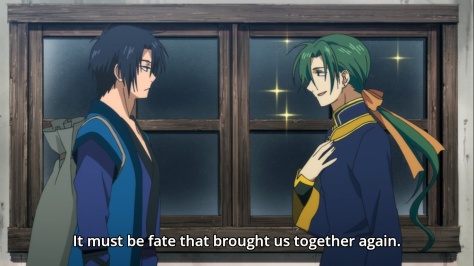 They end up in a brothel. Hak wonders why the man brought him here but the man says it’s easier to hide in such a place. When Hak decides to leave, the man engages him in more conversation. Hak relents and points out the man’s strange clothes. The man says that he was born in Awa but the clothes are imported since you can get anything when you’re in a port city. Hak then gives his observations on the city, how everyone seems lifeless. The man replies that the city is afraid of their lord and that the lord is conducting business without the kingdom knowing. Hak asks what kind of business but the man just responds with “Taking someone’s freedom is the most awful thing you can do” and asks Hak if he agrees. Hak replies that he is a bodyguard which the man calls awful. But Hak says that it’s not so bad. 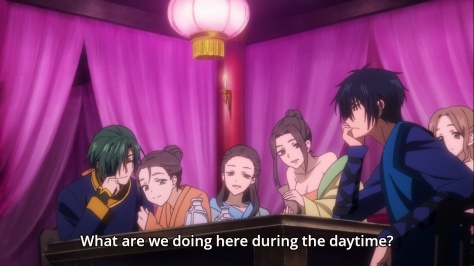 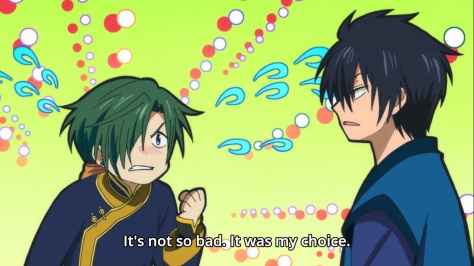 Hak then asks him why he’s particular about freedom. Just then Yun and Yona call out to him from outside the window. After finding that the green-haired man disappeared again, Hak jumps out the window to meet them. Yun tells him that they sense the Green Dragon nearby and that they were surprised that he’d be in a brothel and to find Hak in the same place. 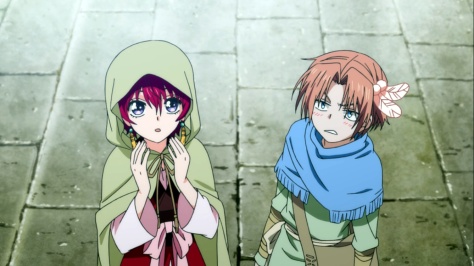 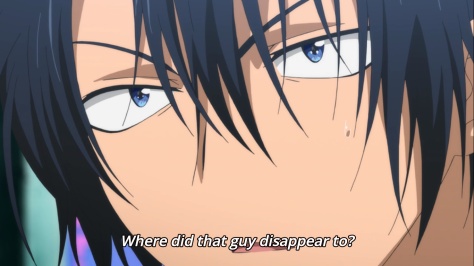 Jae-ha breathes a sigh of relief that he escaped in time. But other than the White Dragon, he sensed another more powerful presence. He muses to himself that he will escape his destiny and duty of being one of the dragons.

Ki-ja and Yun express their dismay over Hak’s being in a brothel. (They just try so hard to avoid saying the word. Censorship and stuff.) Just then, Hak sees some officials passing by and pulls everybody into a narrow alley. When the coast is clear, they get out.

While they walk around, Ki-ja says that the presence of the Green Dragon isn’t in the city anymore. The group then encounters the woman Hak saved the day before. 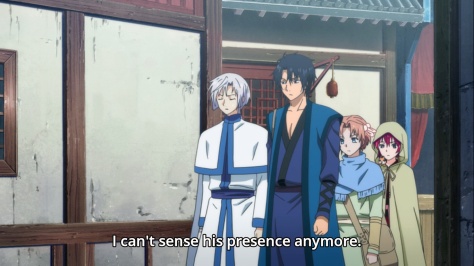 They go to an eating place where the woman works. She then tells them about the situation the city is in, that in fear of Lord Yan Kumji, the citizens can’t stand up to the officials who abuse them. Yona has observed that the citizen’s smiles are fake and that they are lifeless. 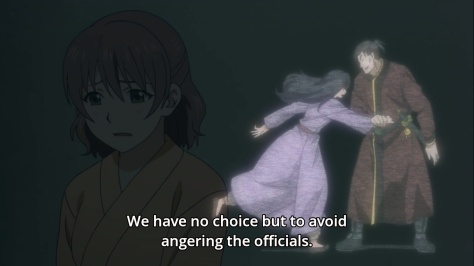 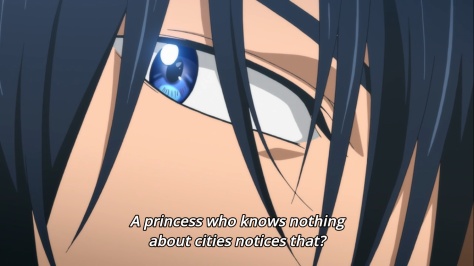 Yun asks about the pirates, if they threaten the city’s security. The woman says that the pirates don’t harm the citizens and only attack Yan Kumji’s boats.

That night, the pirates ambush a boat loaded with drugs from the Kai Empire. When they’ve confirmed that the drugs were on board, Captain Gigan orders them to burn the ship. 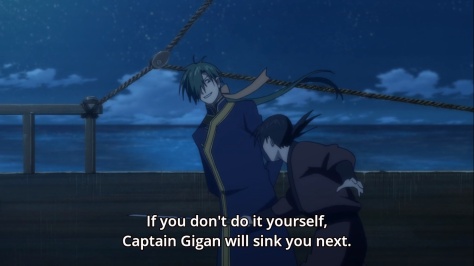 They pack the officials in smaller boats and set them adrift but they were unfortunate that Yan Kumji is not among them. The captain makes sure that nobody killed any of the officials. Her pirates complain about not killing but she scolds them and says that she doesn’t want to burden those she loves with murder. 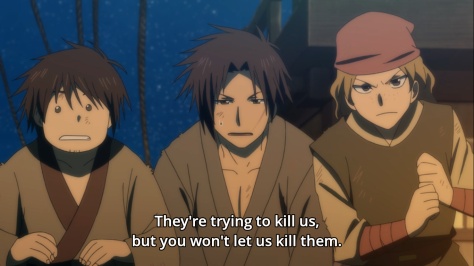 She approaches Jae-ha who was being quiet sitting by himself. He tells her his leg has been all tingly since the day before. The rest of the crew admire him for his power.

The captain laments that she needs more force if she were to face whatever it is she’s going to face (she doesn’t say it lol). Jae-ha suggests that Hak and will try to convince him to join the crew. 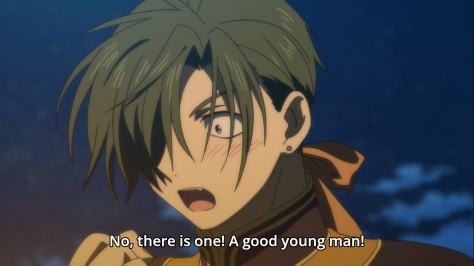 Comments
Here is one dragon I do not understand. He speaks of freedom, duty, and… aesthetics? And if it’s to be all tied up, it’s messed up. Way to make a character *sophisticated* and *intriguing*. I’m sure Yona won’t leave the city  until she’s convinced him to join. Maybe they’ll hit two birds with one stone and solve the city’s problems.

But wouldn’t that attract the Kingdom’s attention? Wouldn’t that be a bad thing since they’re like fugitives now?

The tsundere mother adopting boys to be part of her crew is a bit trope-y. I’ve seen it many times elsewhere to consider it unique.

It also comes as a surprise that Hak left Yona to the dragons’ care without hesitation when an arc ago he went batshit crazy the moment he was separated from her. They skipped that development and it’s a bit disappointing.

Over-all this episode is half and half. I liked how they filled it with as much plot as they can fit without slowing it down or rushing it. On the other hand, the development of the group is mixed up. Hak can trust the dragons but Shin-ah is still the timid one and Yun can identify a pirate ship when it’s his first time seeing the ocean.

In any way, Yona is being Yona but I wish they’d surprise us more.  Don’t you agree?

Welcome to It's Animejin, your go-to blog for per episode recaps and reviews of your favorite anime shows! Feel free to explore!
Follow IT'S ANIMEJIN! on WordPress.com